So Justin turned 8 last Tuesday!  Crazy how fast the years go!  We celebrated his birthday with a pool party, he had a blast.  He and his friends were swimming for 3 hours....taking a break for pizza and cake.  As I always do before he starts an activity we checked his BG, he was at 174, a little on the high side, but swimming brings it down FAST!  It was about 45 minutes after party and swimming started he came to me and said he felt low, and he was at 49!!  So we treated it and he rested for 15 minutes, and we rechecked.  He was ready to go swimming again.  After that pizza was ready, and he ate lunch, and didn't have anymore problems. And because of all the swimming his numbers were good the rest of the day :)  I felt bad because he was loosing out on 15 minutes of his party, diabetes doesn't care that it was his birthday party that he was so excited about.  It didn't really seem to bother him, this is his life now.  But it bothered me seeing him sidelined while his friends were still playing.


So last weekend was our first camping experience. We actually had a lot of fun despite the weather not cooperating at all.  Was so rainy!!  We had a site with electric so we had a fan in our tent, that made it tolerable :) Then we spent the day at Lion Country Safari, a really awesome zoo near us.  Justins BG numbers were good the whole time, and we all had a really fun time!  It's so nice when D cooperates :)  On the ride to the campground we drove past the hospital Justin was in after diagnosis, a flood of memories came back, and I couldn't do anything but smile because as much as this is a life changing event, we are not letting it stop us from experiencing anything, we were off to camp, in a tent! :) 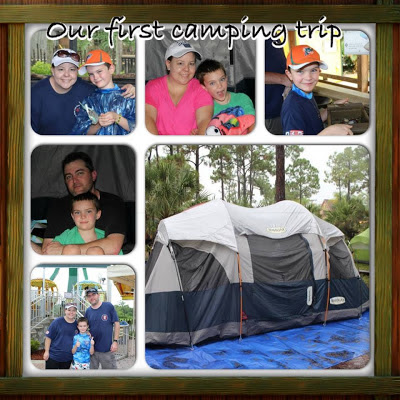 Today I had to take Justin for blood work, he was super brave as always!  Tested for his A1C, which will be the first since diagnosis which was about 14!  So I'm anxiously waiting to hear that at his appt next week.  Also tested for celiac, also an autoimmune disease.  Hopefully both come back good!

Things are going good for us, looking forward the water park this weekend with our local JDRF Chapter!  Justin is super excited about that!!

I will update again next week after his endo appt!
Posted by JMom528 at 7:34 PM