So Justin went to the endocrinologist on Monday, it went good.  She said his numbers are good, and keep doing what were doing.  We don't' have to go back until June, and I just send over his numbers, so she can let me know if any insulin adjustments are needed. She was very impressed with the little chart I made of Justin's numbers from when the school calls me.  She absolutely loves Justin!  He is so silly and she just laughs the whole time with him.  She told him he's her favorite, then wanted a hug :)  She's really nice, and is great with Justin!

Things at home have been going good, were getting into the routine of it all and it is becoming more normal.  School is going good too, they call me everyday and let me know what his number at lunch is, and if they check him any other time, because he thinks he's low or there having a extra snack or something.

I still worry a lot, and probably will forever.  We went to the fair last Saturday with some friends. I felt bad for Justin when his buddy wanted cotton candy or something.....even though he wouldn't have ate it anyway, that's not the point.  It just sucks!  We did good checking his sugar a few more times than normal, it was hot out and he was running around like a crazy man in the fun houses and such.  He wanted to argue about eating because he was not very hungry, he doesn't totally understand that part of this yet.  If he doesn't eat when he's supposed to he'll go low because he's already had the long acting insulin and when it peaks, will cause a low.  He ended up eating and it turned out fine, just frustrating in the moment because before T1D if he wasn't hungry yet, he could just wait until he was.

He gets annoyed when I ask him a million times how he's feeling.  I just like to know LOL.......One day he said his stomach was hurting, and I asked are you hungry? Bathroom? Or you feel low?  He said he felt low, and we checked and sure enough he was in the low 60's.  So he's really starting to get to know his body and how he feels, and should be feeling.  I just started reading a book, "Kids first, diabetes second" I'm only a few pages in, written by another Type 1 Blogger...D-Mom blog.  So far its great, I've read her blog and actually didn't realize she wrote the book until I started reading.   All I can do is read, read, and read some more.  Knowledge is power, right? :)

We are looking forward to another busy weekend, going to the Norton Museum to do an art project with a friend.  Then a playdate afterwards with another friend.   Busy, busy!

So this Saturday will be 2 months since Justin's diagnosis.  Things are getting easier, he knows when he's low and will ask to go check his sugar.  He checks it himself at home, will work on him doing the shot when he's ready.  He's shown a little interest in doing it, then says no you do it LOL.  He'll get there! He went to winter camp for a week over the holiday break. It went ok, I'm still nervous about summer camp, but I have no clue what I'd do with him otherwise.

As I'm sitting here typing this, Justin is watching Good Luck Charlie on Disney channel and the TTI came on with Zach who also has type 1 diabetes, Justin gets so excited to see another kid going through the same thing.  Zach also has a team for the JDRF walk and Justin thinks that's cool, he's super excited for our walk on March 2!

The daily grind of diabetes is very exhausting, mentally, I'm constantly worrying, more so when he's at school.  Is he feeling ok? Will he eat something extra? Did he remember to check his sugar before PE? I'm worried about Valentine's day at school, I'm considering giving the teacher a note to send home with the class, asking to please not attach candy to valentines for Justin, but at the same time I feel bad cause he won't have the same as everyone else, and the last thing I want is for him to feel different.  I'm trying so hard to make sure he knows he can do anything and he's a normal kid who just needs to take insulin to stay healthy. I'm more worried that he'll sneak some in aftercare or something.  Like I said always something to worry about.

Were looking forward to going to the fair in a week, Justin can't wait! I'm really glad he doesn't look forward to fair food, although as he gets older I'm sure he will.  He'll be happy with a slice of pizza and the rides :)  I'm happy were gonna meet some friends there & Justin will have a riding buddy.  Then I can just take pictures instead of getting on the rides.

He has an endocrinologist appt coming up in just over a week, I'm sure his insulin doses will be adjusted a little.  He's had pretty good numbers though, I can tell, he has so much energy again!!

One day at a time, one number at a time, keeping the love of our life happy and healthy!

JDRF Walk for a cure

So I registered us for the walk here in March, team Bustin' Diabetes for Justin :) Since there is nothing I can do to cure this for Justin, things like this is all I can do, and it makes me feel better.  I can be an advocate, and help raise awareness. So far we've raised $150, our goal is $500. If you can help us reach that, please do, the more money raised the more can go to research to improving the lives of those living with Type 1 Diabetes.

Justin is so excited about the walk, for those of you with young children that watch the Disney channel you've heard of the little segments called TTI (the time I) Well there was one with a boy with Type 1 Diabetes, and his team was Zach's Attack :)  So Justin thinks its cool were doing the same thing, to find a cure.

If you can help please visit this link and help support team Bustin' Diabetes for Justin :) Thanks in advance! 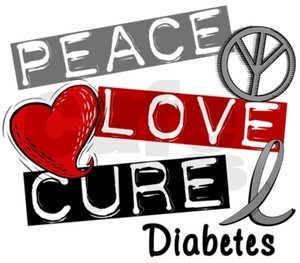 Every day a little more "normal"

I hope everyone had a wonderful holiday! We sure did!  Justin got plenty of new toys and games!  He had a great time with his Grandpa visiting, they had blood sugar battles LOL......Grandpa showed him how he gets his insulin through the pump, and Justin told me that he's cheating :)  I told him his Dr. said he may be able to use a pump within a year.  He's not so sure on that idea, because to him it looks like an IV and the tape was really bothering him from it.  I told him lets just wait and see and whatever he's comfortable with, and no need to worry about it right now.

I'm still going through days of just guilt, sadness and anger.  Just the other day I was watching him eating his lunch and he was looking at the TV, so he didn't even notice me staring at him, I was just looking at his precious little face and into his eyes, and just feeling horrible that he has to deal with this.  I hate that he can't just eat whatever he wants, whenever he wants.....like it was.  I hate that we have to give him multiple shots everyday, and I hate when after the shot he grabs his arm and makes an "ow" face, it sucks when you have to inflict pain on your child.  He never complains about it or fights about doing it, he knows he has to.......but it sucks!  Most of the time it doesn't even bother him though.

He is in camp this week, I wasn't even sure I was going to send him to camp at all ever again lol!  The staff at his school is great, they call me everyday, to make sure they are doing the right thing depending on what his number is. And Justin knows when he's low, his stomach hurts and he doesn't feel good.  So he lets them know right away so he can check his sugar.  He is still in the honeymoon stage, but I'm not sure how much longer as he's been running high at night.  I'm scared for that to end, I feel like right now his numbers are good, but I know once it ends it will be a lot harder to manage.  At least I'm expecting it to be much harder/different.