Ugh! Where do I start?

I'm just feeling extremely overwhelmed the last few days.  I've been home with Justin for the last couple days, first day was high numbers, and correcting all day.  Justin is a picky eater and pretty much will eat the same thing every morning for breakfast, a gogurt, waffles and bacon, with the carbs exactly counted at 45.  So why some days he goes low, and same days he's high after makes no sense to me.  I guess that's because no matter how much we think were in control of diabetes, it's in control really.  It does whatever the heck it wants!  Sometimes it makes sense, and other times not at all.

Yesterday we had a busy day, all of us had eye doctor appointments, me and Justin went in the morning, hubby after work.  So I knew it was coming because the last couple of years the doctor has said he has a little astigmatism, but not enough for glasses yet.  Well this is the year!  My little man is getting glasses, it's not a surprise since both me and my hubby need glasses. We waited until my husbands appt, and went back to pick out frames.  I hate picking out glasses!  Mine are a couple years old now, and I'll wear them until they are crooked LOL :)  Our eye Dr is great!  Justin asks like a million questions, and he entertains all of them.  He even brought out his remote control helicopter and was showing Justin, and flying it around the office! 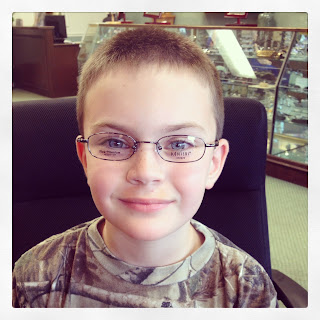 So back to our busy day......eye dr. appts, then me and Justin went to lunch, came home and went swimming for a little bit.  Back to eye dr, and I went to get a haircut......BG good all day!!  Even with a scoop of vanilla ice cream for dessert....

Today, no difference in breakfast but was running high afterwards.....even when the 3 1/2 - 4 hour after breakfast mark hits, when he would normally go low, it was almost 200!  Lunch was down to a perfect 99, then back up into the 300's.  Right now lunch is sliding scale only, so he only gets insulin if he's over 200.  The dr. just increased his doses recently.  So I give it a week or two, and if I see a pattern, I send her the numbers and she tell me what to change. Maybe he needs some at lunch time now, who knows!  Its still super frustrating, so many good days and then a couple rough days makes me so sad and angry again.  I feel like I just need a good cry again.

I'm already feeling bad about his numbers, and go to refill his prescriptions.  Well I gave our new card and the pharmacist was entering them all in the computer, and apparently the new Rx plan doesn't cover the Novolin N....it suggested to the pharmacist Humalin N....Same thing different drug manufacturer.  But said it would be covered with a prior auth from the dr. So hopefully they approve that.  I know its the same thing, but dammit when your used to one thing, its annoying! Its been 8 months, and I'm ready to scream...Ins is the biggest joke ever.  So many hoops to jump through, just to get these life saving medications/supplies.  Its crazy!!   There really needs to be a better way to get these things.  Justin was expressing interest in a pump....I don't even want to know what that will cost, or what hoops I'll have to jump though for that. I was thinking of calling the dr. to see about getting a head start on the process, but I think I'll just wait until Oct when he goes back.  That will be almost a year, and I'll make sure Justin wants to try that.

I'm just getting frustrated cause we aren't doing anything different. I count carbs, we weigh food and use carb factors to get a count for foods that are difficult to count, like pasta.  I'm just super annoyed today with diabetes, and everything that comes with it!  I so wish I could just change spots with Justin.  I HATE that he has to deal with this, I'm sure the ups and downs make him feel like crap.  He never complains though...He's a tough kid.  As I'm sitting in my room typing this he came up cause he wanted to sit with me, he's so sweet.  Now he's sitting next to me watching Disney on my phone LOL....He's my buddy, he makes me smile, and laugh when I need it most.

I know sometime he will be on his own with this, but for now, I'm trying to let him be as carefree as possible and enjoy being a kid.  I let him do as much as he wants as far as his care.  If he doesn't want to poke his finger I do it. He isn't ready to try giving himself his shot, and I'm not rushing him.  I'll ask from time to time if he wants to, and when he's ready he'll let me know.  He understands that he will have to do it eventually though.

So I have the date for the 2014 JDRF Walk to cure diabetes.  Saturday March 1....So now that I have that, I need to figure out some ways to raise money for our team.  And we would love to have you walk with us!!  I'll let everyone know when I start our official walk page, and you can sign up there :)


As for now, I need tissues & some rest....that's my life as a T1D Mom.  Sometimes it a great day, and sometimes it just sucks.

Wow, 8 months since Justin was diagnosed.  What a blur the last 8 months have been honestly.  We have still kept up with our busy schedule...school, scouts, activities.  Easy....No, but we try our hardest to keep things as "normal" as possible for Justin.  So here's some numbers...just averages. Since diagnosis Justin has had to poke his finger about 1,200 times to test his BG, and has had about 960 insulin injections!  That is just crazy!!  And not once has he complained...he's my lil' superhero!

Last night he was low, 67.  But for some reason he was feeling it more than he normally does.  He had a small bag of skittles, and came over to sit with me, he just wanted to be close and cuddle.  Normally he'll just get his candy and go back to watching TV or whatever he was doing (as long as its not running around lol)  In that moment I started to feel so bad again, I wanted to cry, I just held him and let him lay his head on my shoulder.  I told him I'm sorry he has to deal with this, and that he is doing a great job, and I'm so proud of him, fast foward 15 minutes & we rechecked and he was at 101 :)  So of course he says, "Mom, I think that deserves a picture"........I <3 him!!! 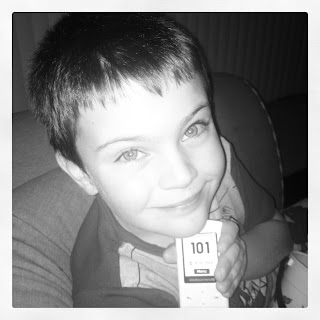 So I wrote the first half of this post this morning.  Fast forward to 8pm and Justin has had 4 lows today!!!  WTH??!!  We did nothing different, same insulin dose, same snack times....diabetes has it's own agenda.  I got lots of extra calls today from camp.  The director was worried it was something she did or didn't do.  I'm like nope, just diabetes being a pain in the butt!  Each time he treated it and it came back up into range.  Not sure what the heck is going on today, but D better behave, we have scout beach day tomorrow :)

I love that his camp will call me whenever they check his BG, they always worry that their bugging me, I'm like not at all call as much as you need to :) He's having a great summer, lots of fun!!

So the JDRF Children's Congress was this last week......I would LOVE to do that with Justin!!  I've read some of the other blogs of those who got to go, it's so awesome!!  Not sure what you have to do to go, but next time it comes up I'd like to try! :)