4 Months into this lifelong journey, honeymoon is over....

Today marks 4 months since Justin was diagnosed.  Since diagnosis he has had approximately 360 insulin injections.  And has poked his finger to check his blood sugar about 720 times.  This is what 4 months of injections looks like:
I think I can say that the honeymoon is over.....he has had a lot of high numbers lately.  It's beyond frustrating.  The Dr. has already increased his morning dose, he's still eating the exact same breakfast, and still needs his sliding scale at lunch time at school.  He really hasn't had to get too many shots at school yet.  Now it's pretty much everyday.

He is still handling everything good.  I just pray for him to have strength when he needs it most.  I know there will hard days in his life when he's "managing" it all on his own.  The other day Chris asked if we should start trying to get him to do his own shots, my response was that he'll do it when he's ready, he has his whole life to do it himself.  I'm in no rush to have him do everything, I'm trying to keep his carefree innocence as long as I can.  He's already grown up so much in the last 4 months, just dealing with everything.

Me on the other hand, not as good.  Some days are great, others not so much. I keep things bottled up until I have a breakdown, not good at all.  I guess I need to give into having a good hard cry more often.  I'm so tired of living by the clock, the weekends are the toughest since we can't just stop to eat whenever, it's gotta be by a certain time or else he may have a low.  It just gets to me after a while.  I'm tired of the anger, sadness and guilt, it just sucks.  I put on my happy face most days even if all I wanna do is cry.  I know I have to be strong for Justin, but it's not as easy as people think.  I try my hardest not to let him see me cry, though he catches me sometimes.  The other night, I told him again how proud I am of him, and that he's an amazing, brave boy and I love him............his response was "Mom, if you think I'm so brave and amazing with everything how come you still cry?"   WOW!  I didn't know what to say to that one!

One of the hardest things to deal with is the ridiculous comments people make.  4 months in, I'm pretty sure I've heard it all LOL!  Ok well maybe not all.....but people say really ridiculous things!

Here's a list of some I can think of right now:
I always try to explain things to people when they say dumb stuff, but sometimes I wanna just let them have it!  It certainly doesn't make things any easier!    I hate that all day at work people will ask how my "big boy" is......I say he's great with a smile on my face, and he really is great....but sometimes I just wanna scream,  he's freaking insulin dependent for the rest of his damn life, has to deal with hypo's & hyper's, and it just sucks!  But it's just easier to smile...............

Some days are really good: 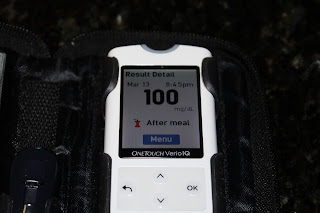 Some days are just hard: 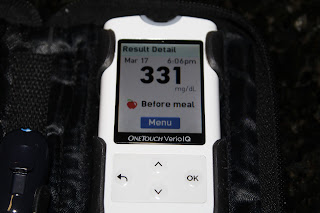 And others are just lousy: 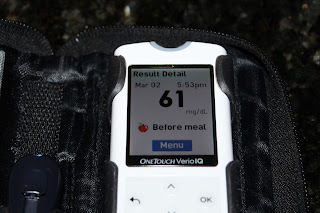 But we keep fighting, and "managing" since that the only option.  I keep praying for strength, sometimes I feel as if I have none left at all.   It is encouraging to read others stories, and talk with those who know what were dealing with.